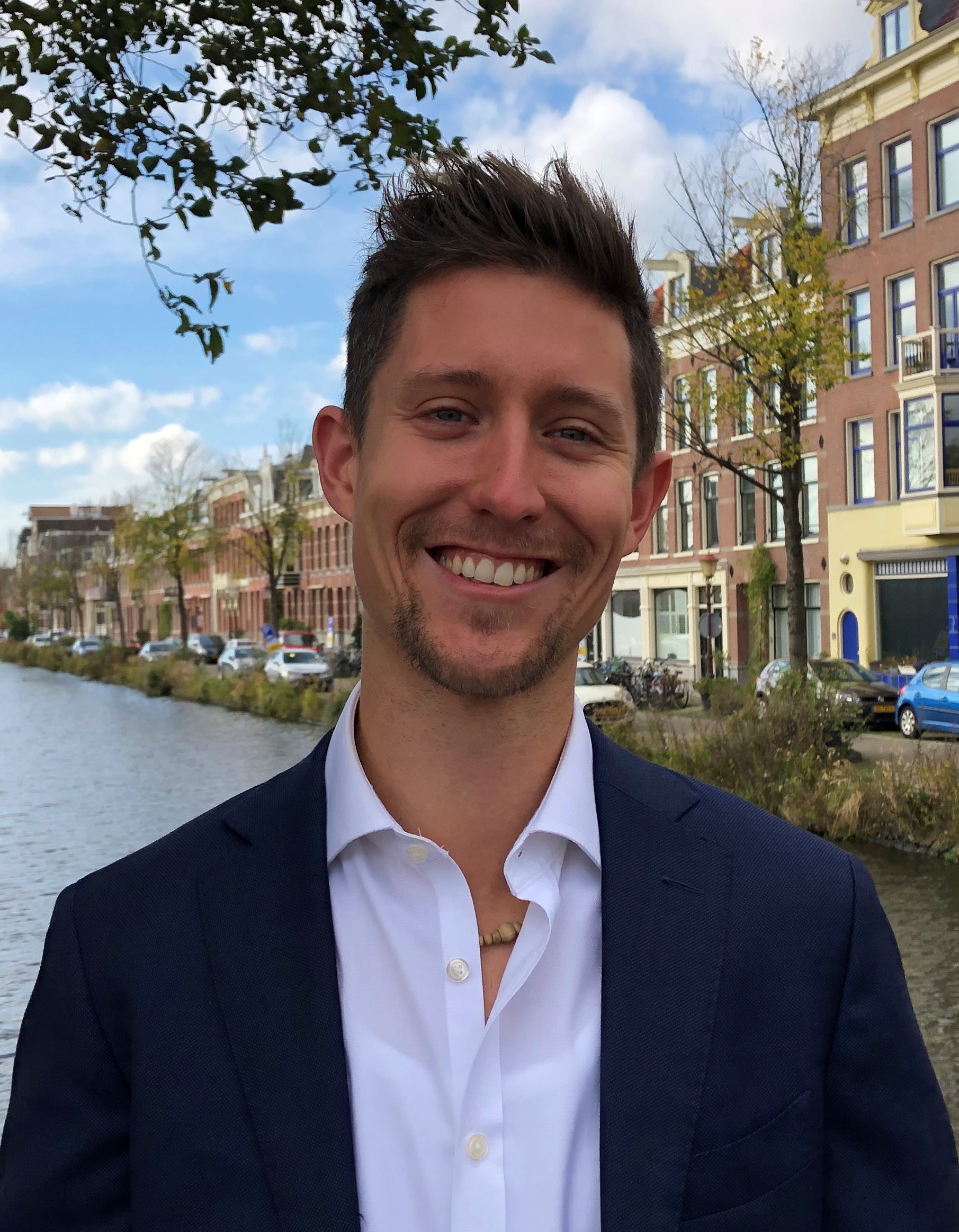 Welcome to my homepage!

I am an economist in the monetary policy department at De Nederlandsche Bank (the Dutch central bank), currently seconded to the Capital Markets Division at the ECB’s Directorate General Monetary Policy. My core research interests lie in the fields of macroeconomics, monetary policy and the macro-finance linkages. I hold a PhD and an MPhil in Economics from the University of Amsterdam and the Tinbergen Institute, respectively.

This is my private website. The views expressed here are my own and do not necessarily reflect those of De Nederlandsche Bank or the Eurosystem. Please click on the links above to find out more about me, my research and other interests, or feel free to contact me directly.

Abstract: Using nonlinear Bayesian methods that fully account for the binding zero lower bound (ZLB), we estimate a large-scale macro-finance DSGE model on US data. Counterfactual analysis suggests that by easing financing conditions, quantitative easing facilitated a net increase in aggregate investment. The resulting expansion of firms’ production capacities lowered their marginal costs. These disinflationary supply side effects dominated over the inflationary effects induced by the stimulus to aggregate demand. At the ZLB, the concomitant rise in real interest rates, in turn, induced a net fall in aggregate consumption.

“Forward guidance and the role of central bank credibility under heterogeneous beliefs” (2020, Journal of Economic Behavior & Organization) with Cars Hommes and Kostas Mavromatis

Abstract: This paper studies the macroeconomic effects of central bank forward guidance when central bank credibility is endogenous. In particular, we take a stylized New Keynesian model subject to an occasionally binding zero lower bound constraint on nominal interest rates and heterogeneous and boundedly rational households. The central bank uses a bivariate VAR to forecast, not taking into account the time-variation in the distribution of aggregate expectations. We extend the central bank’s toolkit to allow for the publication of its own forecasts (Delphic guidance) and the (imperfectly credible) commitment to a future path of the nominal interest rate (Odyssean guidance). We find that both Delphic and Odyssean forward guidance increase the likelihood of recovery from a liquidity trap. While Odyssean guidance can increase ex post macroeconomic volatility, it still appears to be more powerful.

Abstract: Under monetary union, economic dynamics may diverge across countries due to regional inflation differentials and a pro-cyclical real interest rate channel, yet stability is generally ensured through endogenous adjustment of the real exchange rate. The speed of adjustment depends, inter alia, on the way agents form expectations. We propose a model in which agents’ expectations are largely based on domestic variables, and less so on foreign variables. We show that such home bias in expectations strengthens the real interest rate channel and causes country-specific shocks to generate larger and more prolonged macroeconomic imbalances.

Abstract: We build a novel macro-finance model that combines a semi-structural macroeconomic module with arbitrage-free yield-curve dynamics. We estimate it for the United States and the euro area using a Bayesian approach and jointly infer the real equilibrium interest rate (r∗), trend inflation (π∗), and term premia. Similar to Bauer and Rudebusch (2020, AER), π∗ and r∗ constitute a time-varying trend for the nominal short-term rate in our model, rendering estimated term premia more stable than standard yield curve models operating with time- invariant means. In line with the literature, our r∗ estimates display a distinct decline over the last four decades.

Abstract: At least since the euro area sovereign debt crisis, it is evident that country risk premium shocks have adverse economic effects, not only in emerging economies, but advanced economies as well. Using a Bayesian Panel Vector Autoregression model, we find that increases in the risk premium lower output under monetary union, yet not in countries with flexible exchange rates and independent monetary policies. We study the transmission mechanism in a two-country New Keynesian model and show that capital controls substantially attenuate the effects of risk premium shocks. However, the welfare gain of imposing capital controls hinges on the nature of the shock and the prevailing exchange rate regime.

“The Macroeconomic Effects of QE in the Euro Area: Evidence from a Structural Estimation”, with Gregor Boehl.

“The market-implied effects of the Biden stimulus and the Fed’s new policy framework“, VoxEU March 2021, with Annelie Petersen and Meilina Hoogland.

“Gauging the impact of COVID-19 on market-based inflation expectations“,  VoxEU, May 2020, with Dirk Broeders, Annelie Petersen and Nander de Vette.

“The Impact of the COVID-19 crisis on the Equilibrium Interest Rate“, VoxEU April 2020, with Jan Willem van den End

Undergraduate-level course at the University of Amsterdam, Teaching assistant to Dr. Joris Marée and Dr. Arjen Valstar, Fall 2015, 2016 and 2017

Besides economics, my greatest passion is aviation. It all began in my early childhood, when my dad — who’s himself a passionate airman — took me and my brother regularly to the nearby airfield for a flight. The interest grew steadily over time, and, ultimately, in the age of 14, I started with the training for the glider pilot license.

Gliding is a time-intensive and social activity. It takes a minimum of four to five people on the ground to get one glider in the air. Once airborne, the glider pilot can view the world from a bird’s perspective. In fact, on the search for thermals or other natural uplifts like windward faced ridges or mountain waves, you may enjoy the grand experience of sharing a thermal updraft with an eagle or a buzzard. Cross-country flying in sailplanes is a challenging task, but experienced pilots can fly distances of up to thousand kilometer or more.

Later on, I continued with the flight training to obtain the sports pilot license. With this license in my pocket, I was allowed to fly microlight aircraft. These are small single-engine aircraft with a maximum take-off weight (MTOW) limited to 472.5kg. Due to their limited weight and (relatively) modern engines, they provide a low cost entry into engine-powered flying. Since, however — not the least due to my father — my excitement is for vintage aircraft, I immediately continued the training to obtain a private pilot license. With this license the MTOW depends on the particular class-ratings, which in my case was for places with a MTOW of up to 2 tonnes. At the time, this license allowed me to fly the Piper Pa-18 of a friend of mine, for what I am highly indebted to him. His Pa-18 was built in 1953 and served in the Belgian military as a basic trainer after World War II. It’s a great plane and offers a lot of fun for your buck!

Over the years, I made several trips to other European countries ranging from Norway to Croatia. It’s always amazing to see the landscapes change beneath you and be able to travel to less known places.

Since August 2016, I regularly fly an open-canopy biplane from the early 1970s. This Starduster Too is an American kit plane powered by a flat-4-cylinder Lycoming O-360 engine that is powerful enough for some advanced aerobatics. 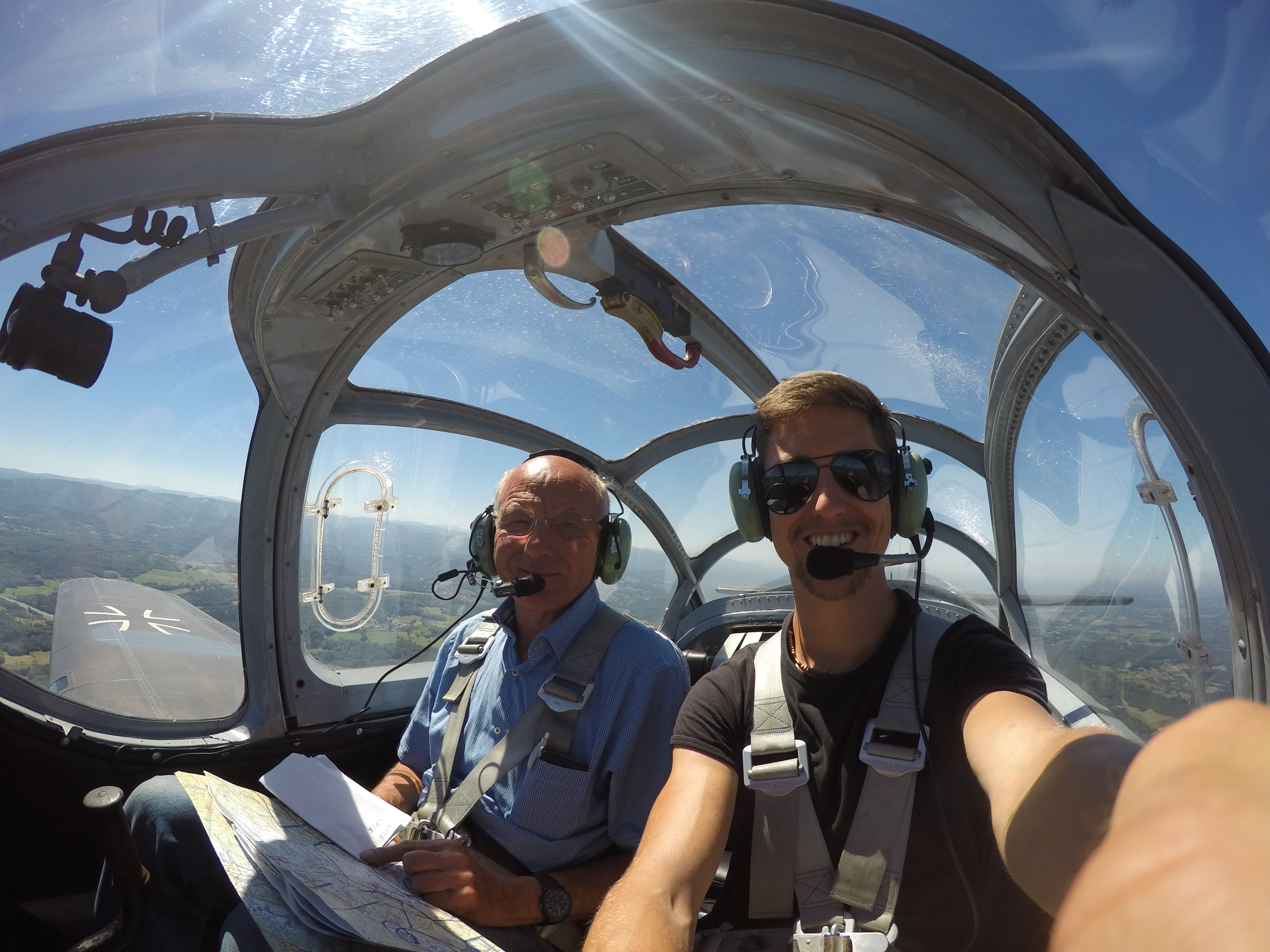 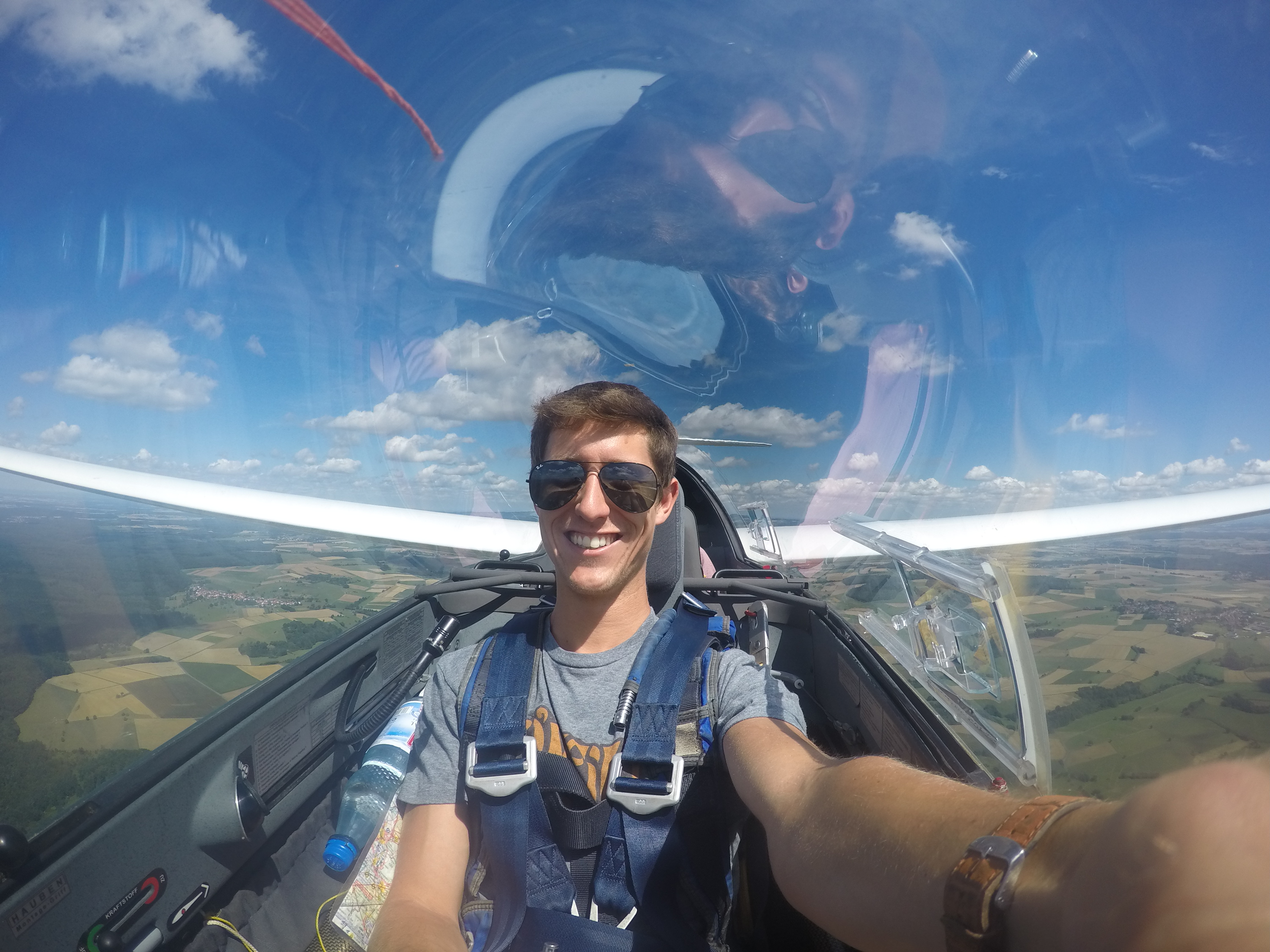 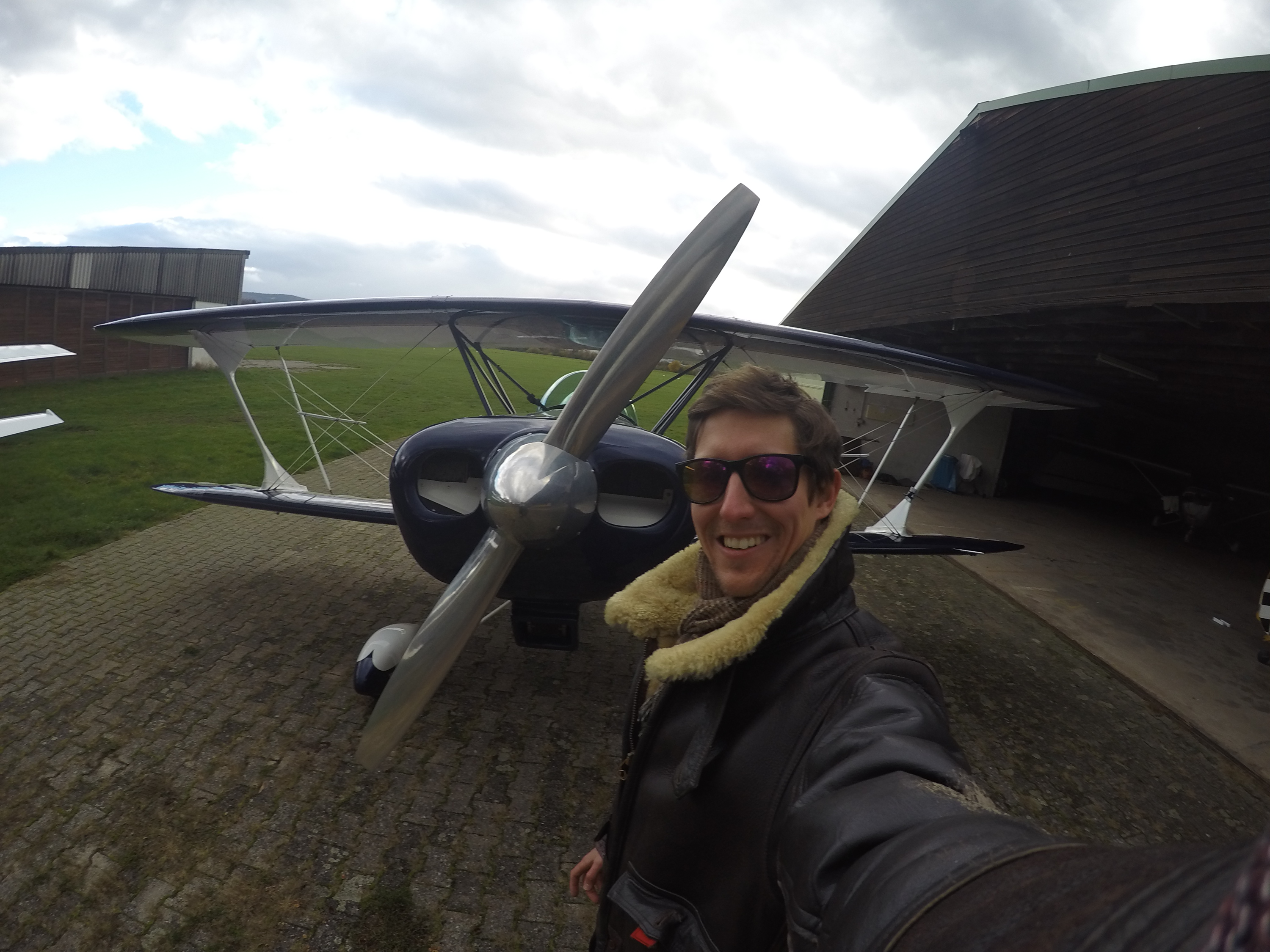 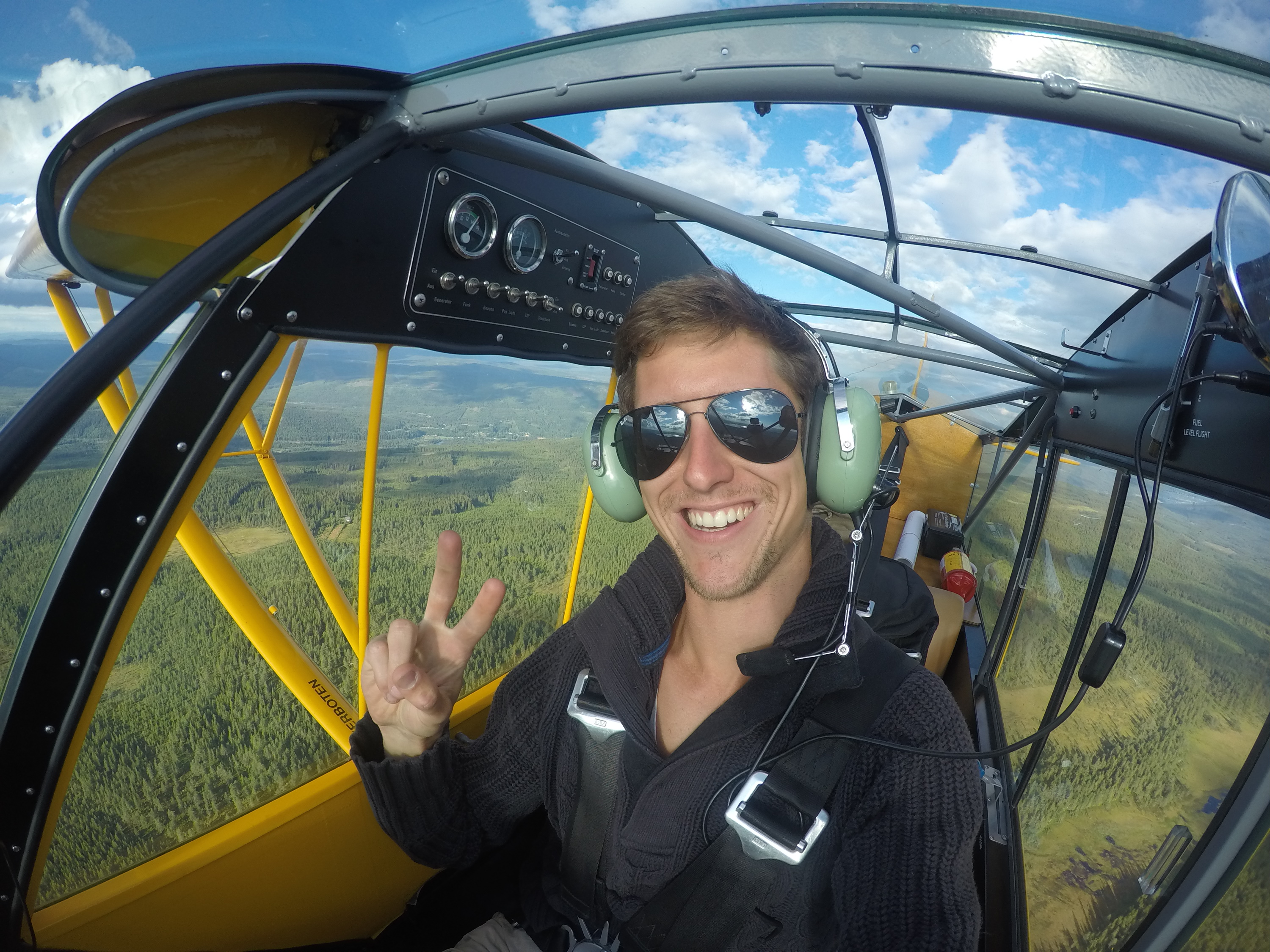